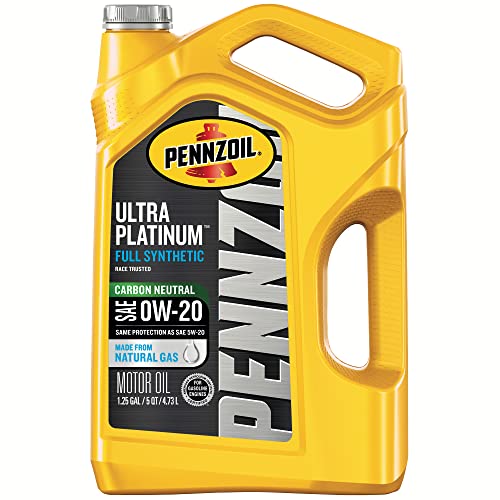 The Pennzoil ultra platinum oil 0w-20 is one of its kind, as it is made from natural gas by utilizing gas to liquid PurePlus Technology.

The high-quality base oils with added additives grant better fuel economy and protect the car engine against power loss.

It also reduces sludge/deposits and keeps the pistons cleaner, not only in standard car engines but also in luxury car engines as well.

The piston cleaning is based on the strict industry standards i.e., ILSAC GF-6 and Sequence IIIH, and has been tested out by using SAE 5W-30.

The Pennzoil ultra platinum oil 0w-20 has another great feature which is to offset the Carbon (CO2) lifecycle emissions. That’s why Pennzoil is known to be carbon neutral motor oil in both synthetic and conventional oils.

The Pennzoil company uses some extraordinary gas to liquid Conversion PurePlus Technology to make their oils.

The same is the case with Pennzoil ultra platinum. As it’s a full synthetic motor oil made from natural gas and is designed for severe driving conditions.

Grants way better engine wear protection against friction. Plus, the oil helps you protect your car engine from power loss and grants better fuel economy. You can drive on average an extra 550 Miles/year compared to a dirty engine.

It outperforms conventional oils in case of performance in extremely low temperatures down to -40ºF. On the other hand, it also eliminates the threat of quick oil oxidation and degradation in extreme heat up to +400ºF.

The important thing about Pennzoil 0W-20 oil is its Carbon Neutral ability. It is achieved through bonafide Nature-Based Carbon Credits which help in offsetting carbon dioxide lifecycle emissions.

High-Quality Base Oil With Fewer Impurities

As it is made from natural gas, the high-quality base oil has fewer impurities compared to other base oils. These base oils are combined with advanced additive technology to give more cleanliness and performance.

The Pennzoil company has also a viscosity grading system for different types of vehicles. Their system is a bit unique with 4 main types of synthetic oils each having different viscosity grades:

As for vehicles, it is suitable for all cars, SUVs, light vans, and trucks with gasoline, and turbocharged engines. It is available in a 5 Quart Bottle (4.73 L/1.25 GAL).

Compared to Pennzoil and its unique natural gas to liquid PurePlus technology, the only alternatives are the Valvoline and Royal Purple 0w-20 synthetic motor oils.

Valvoline is one of the renowned synthetic oil. It is cheaper compared to conventional as well as synthetic oils. It has the necessary detergents, antioxidants, and additives to prevent sludge formation, deposits, engine wear, and other issues such as friction.

Due to the added additives, engine protection increases up to 40% in extreme temperatures and also prevents quicker oil breakdown. Plus, It works fine with every car engine that needs 0w-20 motor oil.

The Royal Purple 51020 is one of the highest performance 0W-20 synthetic oil for cars. It’s an API licensed oil with enhanced added additives to prevent sludge and deposit formation.

The proprietary additive technology grants 2x better oxidation and 6x better engine wear resistance. That’s why it is mostly used for diesel and gasoline engines. Another great thing about Royal Purple is that it is compatible with other synthetic and conventional oils.

My Final Verdict To You

One thing I say is its versatility with a wider viscosity grading system that gives it an edge over other motor oils. It is available in various viscosity gradings for different types of cars as you have seen in the above car recommendation checklist.

Q: How Many Miles Does Pennzoil Ultra Platinum Last?

Ans: For a car or vehicle with optimum engine functioning, the Pennzoil Ultra Platinum lasts up to 10,000 Miles without any poor performance. But, do know that the miles can get lower if your car engine has problems.

Q: Where Can I Buy Pennzoil Ultra Platinum?

Ans: You can buy Pennzoil Ultra Platinum from your native store in your region. Just know the viscosity grade that your car needs. You can also get it from Amazon, from Pennzoils official site, or other trusted online stores.