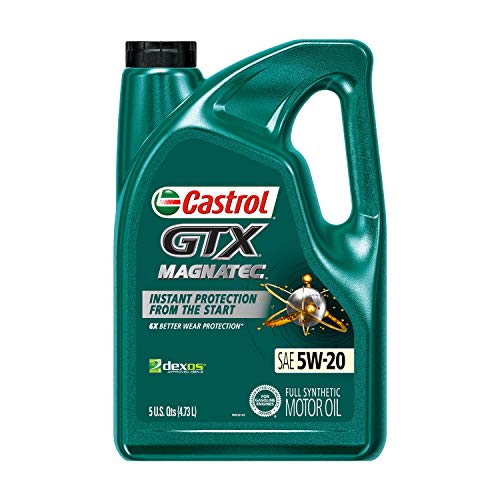 When the engine is stopped, the engine oil will run down into the oil pan. Therefore, the engine will wear out the next time you start. 75% of engine wear occurs immediately after starting.

Its intelligent molecules detect and adsorb easily worn areas inside the engine when most protection is needed at start-up.

In my previous article, we talked briefly about the Top-Selling 5W-20 synthetic oils recommended by thousands of users worldwide.

And this post covers everything you need to know about the Castrol 03063 GTX Magnatec 5w-20 full synthetic motor oil.

After in-depth research about the oil’s features and values included, we analyzed the feedback of more than 19,000 users.

We concluded the oil’s pros and cons to help you make the right purchasing decision and keep your vehicle working smoothly and efficiently all year round.

The Castrol GTX Magnatec motor oil was created for modern Ford engines, with a viscosity of SAE 5W-20, and meets the Ford WSS-M2C948-B specification.

However, it may also be suitable for other motors that left the assembly line after 2012 and have the appropriate specifications.

The engine’s internal parts, such as cams and rocker arms, are under pressure of up to 10 tons per square centimeter. The surface of these parts is covered with a thin oil film.

But unless the oil has a strong oil film, it cannot withstand significant pressure and causes a large amount of friction, resulting in the wear of important metal parts.

And here comes the Castrol Magnatec motor oil to maximize the engine’s original performance with its potent oil formula, ensuring that the engine works smoothly from the start.

This fully synthetic oil gives your engine the highest performance, guaranteeing optimum protection from the first turn of the key in the ignition.

Synthetic oils are more reliable in all situations that subject the engine to stress, from driving in extreme temperatures to towing heavy loads to idling in start-stop mode.

The Castrol MAGNATEC 5W-20 synthetic oil compared to other conventional oils contains unique “smart” molecules that are securely fixed to the internal elements of the motor, protecting them from wear.

This is especially important when starting and warming up the engine since other fuels and lubricants, as a rule, flow down during downtime, depriving important components of protection.

Lubrication action Smoothes the movement of the engine’s sliding parts (parts that move by rubbing) and rotating parts such as cylinder liners and piston rings, crankshafts, and camshafts, and reduces friction and wear.

The lubricant effect of the Castrol Magnatec oil for the engine ensures a smooth move no matter the driving condition.

This oil offers the engine a cooling action by absorbing the high temperatures caused by combustion and friction to cool the engine and prevent overheating.

By filling the gap between the cylinder liner and the piston ring and sealing it, leakage of combustion pressure (engine power) is prevented.

It forms a firm layer that cannot easily break out during harsh driving conditions, including hot/cold temperatures and high/low driving speeds.

The oil formula offers the engine six times more wear protection than other oils. It helps you avoid unexpected downtime and reduce repair costs by providing a high level of engine protection during service intervals.

This oil protects the engine’s parts from wear by preventing sludge build-up in harsh operating conditions. It also provides a corrosion-resistant protective layer on moving metal surfaces, even in extreme conditions.

The oil neutralizes the acid generated by water droplets and the combustion gas generated by the temperature difference between the engine’s inside and outside parts. It efficiently proved to protect the engine from rust and corrosion.

The oil prevents dirt from burning components and deterioration of oil from remaining inside the engine and keeps it clean.

This Castrol oil also contains antioxidants that interrupt chemical reactions that can cause oil to thicken. As a result, it provides higher mileage with effective piston deposit control and maintains its viscosity for long engine life.

If you are more concerned with the higher mileage then you can use the other version which is Castrol GTX Magnatec Mileage.

Besides, this oil doesn’t have the traditional coloring pigment found in other oils, so it does not have a green tint that is familiar to buyers.

The main highlight of the Castrol GTX  MAGNATEC engine oil is the molecules that are firmly held on the surface of parts and form a strong film, even when the bulk of the oil has drained into the crankcase.

These oils protect the engine from the very first minute of starting and do not allow dry running even during warm-up.

All things considered, this oil might not be suitable for your motor specification or might not meet your expectations. If this is the case, here are some oil alternatives to help you find a matching oil for your needs:

PurePlus™ technology is the result of a revolutionary process that converts natural gas into 99.5% pure base oil, making out a Top quality motor oil with superior cleanliness.

Made with natural gas base and high-performance additives, the Pennzoil Platinum Full Synthetic Motor Oil can keep pistons up to 40% cleaner than the industry’s most rigid standard… the ILSAC GF-5 standard.

It is designed to provide excellent engine protection against the main factors that can damage engines over time and protect critical engine parts for up to 16,000 miles between oil changes.

The Castrol Edge is an advanced full synthetic motor oil that uses a unique additive. Due to the additive component, the resource of the power unit is increased by 30%.

The effect is achieved due to a durable oil film, the thickness of which is 40% higher than that of similar lubricants from other brands.

This particular oil is the best choice if you want superior performance under extreme (high) driving temperatures.

This oil is highly recommended for use in motors operating at extreme loads and for those looking for an immediate engine start during cold climates.

Also, I recommend you use Bosch 3312 premium oil filter with the Castrol oil. As it screens out more harmful contaminants to keep your car running much nicer.

Ans: The Castrol GTX Magnatec 5w20 contains intelligent molecules that stay within engine parts and form an extra protection layer during the warming-up process when the engine needs the oil most. These molecules minimize the engine’s wear and protect the engine’s critical internal parts for longer service life.

Ans: The mileage for Castrol GTX Magnatec 5w20 is around 10,000 miles. But, do know that oil change interval is different based on the car model, driving conditions, temperatures, etc.

Ans: No, the Castrol Magantec does meet the requirement of Chrysler MS-6395.